​The JVC PC-5 from 1981 is more than a simple boombox. It was advertised as The Quintet because the system is actually built from 5 independent components. For home use the amplifier, tuner, cassette deck and the two loudspeakers can be placed in any configuration you want. If you wanted a portable unit, all these components could be assembled into one piece and with the added handle it could be easily transported. The amplifier section is a 20W/ch max. power unit (10W/ch DIN 45500) with independent left and right channel IC modules. The amplifier contains the mains transformer which means that the amplifier could be used independently but it will also power the other components of the system. The sensitive tuner brings four radio bands, including FM stereo, AM and two short-wave bands. Clean, low-distortion FM stereo reception is delivered by a PLL circuit. The cassette recorder section is an advanced 2 Motor Full Logic controlled unit featuring JVC's own SA-heads and ANRS (Dolby compatible) and Super ANRS noise reduction systems. Recordings can be made on all tape types, Normal, Chrome and Metal while the recording level can be set manually and visualized on a very basic LED VU meter. It is the cassette deck that contains the battery compartiment which means that the whole portable system will be battery powered by the cassette deck which in turn can be used independently as a field recorder if necessary. The loudspeaker looks like a two way speaker but it actually contains one 10cm full range driver while the "tweeter grill" only hides the bass-reflex opening. There is however an additional bigger loudspeaker set (RB-95) sold as an accessory for home use that is a genuine two way loudspeaker. Among other accesoires we could mention the L-E5 Linear Tracking turntable and the R-15E wired remote. Fully assembled Dimensions: 538x294x243 mm | Weight: 12.9kg | Operation: Mains, 12V ext., 8xR20 batteries.

​The PHILIPS D8814 was introduced in 1982 and it's an upgraded version of the D8714, with added Digital clock and Digital display for the radio section. Due to it's "space age" styling it is affectionately called "The Elephant" by enthousiasts. Technically it belongs to the top class portable recorders (boombox) featuring all the bells and whistles borrowed from full size High-Fidelity components. Even though the cassette recorder section features a basic mechanically controlled unit this is capable of handling Normal, Chrome and Metal tapes and it also features Automatic but also manual recording level setting with LED recording level meters and Dolby noise reduction. On top of this the cassette recorder section has a Digital counter (a not too common feature even on separate Hi-Fi compnents of this age), ACS - Automatic Computer Search for up to 19 tracks on a cassette and Memory Stop. As usual with Philips, this model also features the well known Philips Long-Life head. The radio section of the D8814 features a Digital LCD frequency display and fine tuning knob for AM and SW radio stations. It has to be mentioned that all the "Digital - LCD" panels are sourced from Sharp-Japan. (More about Philips-Sharp in the TV to GO section). The amplifier section is specified at 10W/ch that drives a - 7" Woofer 2" Tweeter 4Cone speaker system. Even the front grill suggests that there is a separate tweeter inside but in reality there is only a large woofer with a whizzer acting as high frequency extension. The truth is that this type of speaker works brilliantly in such a portable system. So you think this is all ? No, this top quality boombox also features a Qurtz Clock with Digital display, Timer function for radio and cassette and a 0-99 minutes sleep timer function. Wait, there is a Phono-Line input as well for external sources and line-out connectors as well ... and connectors for external loudspeakers. Size: 480x28x140 mm | Weight: 6.6 kg (batteries included) | Operation: 12V car, 8xD cells.

​Think of the Philips Sound Machine as a sound factory. The D8614 was the first model in a new and modern boombox series introduced by Philips in 1982. The amplifier section is specified at 3.5 W/ch in battery operation mode and 5W/ch if the unit is operated from the mains. Most brochures specified 10W/ch Music Power. The speakers consist of a 17 cm woofer and one tweeter per channel. There are separate tone controls for bass, treble and Loudness. The amplifier also has continuosly variable Mono-Stereo-Stereo Spatial setting, Phono input and Line In-Out connectors at the back. The radio section has FM-Stereo, MW, LW and SW wave bands. The cassette recorder section uses a feather touch Micro Processor controlled 3 Motor Drive unit equipped with Longlife heads. There is manual tape selector for Normal (50-12000Hz), Chrome (50-14000Hz) and Metal tape (50-15000Hz) while the record level setting has Automatic or manual level setting used with a two colour LED VU meter. Dimensions: 610x250x130 mm | Weight: 6.5 kg | Operation: Mains, 12V external, 8xR20P batteries. A black version was sold under the Radiola name, a Philips sub-brand. 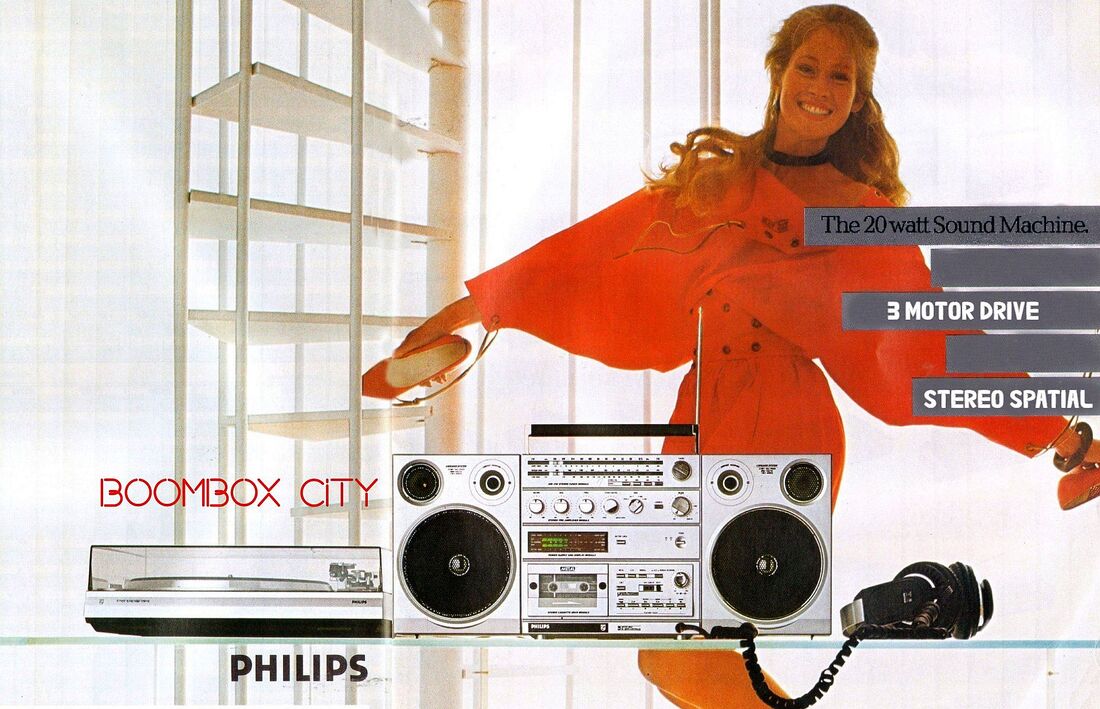 ​Philips, creators of Compact Disc technology, have created the pure, perfect and powerful sound of the CD 555 - The World First CD Boombox. New-generation integrated circuits and a new ultra-compact laser assembly. That's how Philips have made Compact Disc transportable. A player with just the same specifications, just the same fingertip facility as a Philips home player (you can even connect it directly to your HiFi system as the CD source). Next to the CD player is a HiFi cassette deck. Among the host of high-spec features in the cassette deck you will find a SER solenoid electronic soft-touch tape transport, exclusive Philips Azimuth tape guidance, Long-Life head, Dolby B noise reduction, automatic tape selection and a LCD display to show the exact state of operations. With the APLD, Automatic Programme Loading Device, you can select up to 20 tracks to play in any sequence (from a single side of the cassette). The Record Sync facility automatically starts the recording at the same time as disc playback - at any chosen track. Auto Record Pause automatically inserts 4-second intervals between recorded tracks, to make sure of error-free track search and programming. You can, of course, record from the tuner too, or from external sources including record player, cassette deck, TV set or microphone. The tuner section has four wavebands: FM/LW/MW/SW with fine tuning and PLL FM stereo decoder. The amplifier section has a Music power: 2x4 W (12V dc supply) and 2x25 W (220V ac supply), 5-band graphic equaliser and volume control with automatic loudness. For true HiFi sound the Philips Sound Machine CD555 is equipped with a fully-sealed particle board enclosure that can be clipped on or detached from the player unit. These are two way loudspeakers with a 40mm cone tweeter and a 130 mm woofer. Size: 600(320)x220x200 mm | Weight: 10 kg |Operation: Mains, EM 5555 rechargable battery optional.

​Pioneer's CarryCom System was a new concept in compact stereo components. It packs like a portable, but unpacks into individual components - speakers systems, versatile stereo FM/AM tuner/amp combo and fully-equipped stereo cassette deck. Together they add up to integrated component system, just like home hi-fi's. When sold as complete system the following combinations were available: CK-3, CK-W3, CK-5, CK-7T and CK-R11. Your options however are not limited to these "ready made" combinations as the CarryCom System is a modular system and the components are designed so you can choose exactly the right combination of units that best matches your needs - and your budget. These are the components that you could choose from:
TUNER-AMP: FA-C3 tuner-amp with analog AM/FM Stereo | FA-C5 tuner-amp with analog AM/FM Stereo, 5-band Graphic Equalizer | FA-C7T tuner-amp with Quartz-PLL Synthesizer preset SW/MW/FM Stereo tuner, 5-band Graphic Equalizer. All models feature the same power output: continuous average power 12.5 W/ch, min. at 6 ohm from 60-20.000Hz with no more than 5% total harmonic distortion and the same size, 225x110x150 mm. There was an additional Power Amplifier as well with continuous power output of 30 watts per channel, min. at 6 ohms from 40 to 20.000Hz with no more than 5% total harmonic distortion. Size: 225x110x192 mm, weight: 5kg.
CASSETTE DECK: CT-C3 stereo cassette deck with Dolby noise reduction and Automatic Level Control | CT-C8 stereo auto-reverse cassette deck with full-logic control, auto tape selector (Metal/Chrome/Normal), music search, Dolby noise reduction | CT-C9W stereo double cassette deck with 2+2 motor transport, double speed tape copy, relay play, full-logic control. The CT-C3 and CT-C8 have the same size 225x110x150 mm, and can be powered by any of the tuner-amplifiers or with 10 D-type batteries. The CT-C9W dimensions are 225x110x200 mm and can be operated from the mains or external DC: 12-15V.
SPEAKER SYSTEMS: CS-C3 2-way bass reflex with 12cm cone woofer and 2.5cm Ceramic Tweeter, 6ohm, 50-20.000Hz, 45W, 168x226x150 mm | CS-C7 2-way rear open type with acoustic dampers, 15x21cm Pioneer exclusive Flat Woofer and 9cm cone tweeter, 6ohm, 40-20.000Hz, 100W, 168x226x150mm | CS-C11 3-way rear open type with acoustic dampers, 15x21cm Pioneer exclusive Flat Woofer, 9cm cone tweeter and Ribbon Supertweeter, 6ohm, 30-50.000Hz, 100W, 168x336x150 mm.
Additional components are the PL-C7 belt-drive turntable, AC-C7 accessory case, AD-C23 carrying handle and mounting set.
The Pioneer exclusive FLAT WOOFER covers the front panel of the speaker enclosure edge to edge. You get much more bass in far less space. All the center is a cone tweeter to handle the mid and high frequencies with maximum clarity. A port on the rear, and special acoustic dampers on one side of each enclosure add dimension and authority to the sound. In the 3-way CS-C11 systems, superhighs are handled by the Ribbon Supertweeter.

​Imagine the dynamic sound of a quality stereo system. And imagine how nice it would be if you could take this sound along with you wherever you go. Now you can experience the beautiful sound of Sansui in a package so compact you can carry it enywhere. It's the Sansui CP-7 P-Compo System from 1982. Tune to your favourite program (choose from 20 presets, 5 FM, 5 AM, or 10 shortwave bands) or play your favourite tape. The amplifier will always deliver the clearest reproduction of your music source (15 W/ch 4 ohm). And you can program up to three selections in advance on the metal compatible cassette deck using the Automatic Music Program Selector (AMPS), a special Sansui feature. With the convenience of a built-in digital clock, timer and sleep timer, you'll want to take the Sansui CP-7 wherever you go, and it even has inputs for a turntable. Simply lock the speakers and the handle to the main unit using a coin and you will have beautiful music in motion. Size: 530x210x193 mm | Weight: 9.3 kg | Operation: Mains, car battery, 8 D cells. (Also available in black)