At the begining of the 70s a new type of portable device became increasingly popular in Japan. This was the so called "RATECASE" (RAdio, TElevision, CASSette) range of products that combined in a portable device a radio, a TV set and cassette recorder. The first manufacturer to introduce such a device was Matsushita Electric Co. (today Panasonic), this was the National TransAm 3in1 from 1972. Other manufacturers followed the trend with iconic models such as the SONY Jackal 300, SANYO Stranger, SHARP Searcher, Victor Karakase50 or the HITACHI "Kenbunroku".

​The K-62 (Mark 5 K-62) was a portable stereo cassette recorder with a built-in black and white TV having a 14cm diagonal. The radio section featured FM Stereo, AM and SW reception. Power output was 2x2.5 W delivered to the 12cm full range speaker system. The cassette recorder is a one motor mechanically controlled system with a frequency response of 50-12.000 Hz (normal/chrome). The unit can be powered from the mains, 10 batteries or a 12V external source. For full home entertainemnet system there was available an add-on turntable, external loudspeaker, microphone and headphones. In Japan the system was heavily advertised featuring Marco Polo the main character of the NHK TV series. Dimensions: 505x345x155 mm | Weight: 7.5 kg

​The Stranger T4100 is a portable unit that combines a cassette recorder, radio and a TV set. The cassette recorder section is a basic one motor piano key controlled unit, capable of handling Normal and Chrome tapes. The black&white, 10cm diagonal TV is placed on the front of the unit where all the other controls can be found. It's slightly narrow and tall front is given by the fact that the unit is equipeed with 100x150 mm oval loudspeakers complemented by 50 mm tweeters on each side that are powered by a 5W/ch amplifier. The unit features line-in and line-out connectors as well as headhone and microphone connectors. Dimensions: 416x276x211x mm | Weight: 7.4kg | Operation: Mains, 7 "D" cell batterie or 12V car power.

​The Sharp 5P-R2U from 1979 is a unique boombox with built-in 14 cm diagonal black and white TV. As a consequence along with the usual AM/FM radio section we have a built in VHF/UHF Stereo TV tuner. The amplifier section consists of a 6W/ch power module driving a 16cm bass-mid and a 5cm tweeter per channel. Cassette recorder section is a mechanically controlled unit compatible with Normal and Chrome tapes (50-12000Hz), manual record level and VU meters and it also features music search system. There is also provision for phono input, line in-out, input for external microphones and output for headphones and external loudspeakers. Dimensions: 602x223x337 mm | Weight: 10.6 kg
| Operation: Mains, 12 V ext., battery)

​This Sony marvel of miniaturized technology serves up three of the world's best courses of entertainment. For appetizers, there's a precision AM/FM radio. Next, enjoy the main course with the quality 10 cm high-contrast, black and white TV. And top it off with Sony's state-of-the-art cassette recorder. There's even more! Sony's added a new dimension to spice up your sound entertainment. Stereo. That's right, Stereo! The music of your favourite FM stereo station playing out of two dynamic 10 cm speakers. The cassette recorder plays back in stereo and records through its built-in condenser microphones. It will also play back your pre-recorded audio cassettes with the stereo sound you've come to appreciate. Read all about the feast of features that come with this lightweight Sony. Once you do, you'll find yourself working up a big appetite for the FX-414. Dimensions: 430x140x290 mm | Weight: 6.3 kg | Operation: Mains, battery.

​The Victor M-8000 is the Japanese domestic version of the JVC Model 3090. The main/different feature of this boombox is the built-in black & white 4.5" TV. As a consequence there are two dials on the front of the unit, one for FM/AM radio tuning and one for UHF/VHF TV channel tuning. All the function buttons of this boombox are placed on the front panel making-it the most "button-rich" portable ever. The cassette recorder section consists of a mechanically controlled recorder that can handle Normal and Chrome tapes (45-12000 Hz, 40-13000 Hz) with automatic and manual record level controls and needle type multifunction VU meters. The amplifer section is specified at 3+3 W EIAJ/DC driving two 16 cm bass-mid and two 5 cm tweeters. There are inputs for Phono and Line In and there is also a Line Out and external speaker connector at the back of the unit. Size: 497x205x294 mm | Weight: 9.5 kg | Operation: Mains, 12V, 9 D cells. 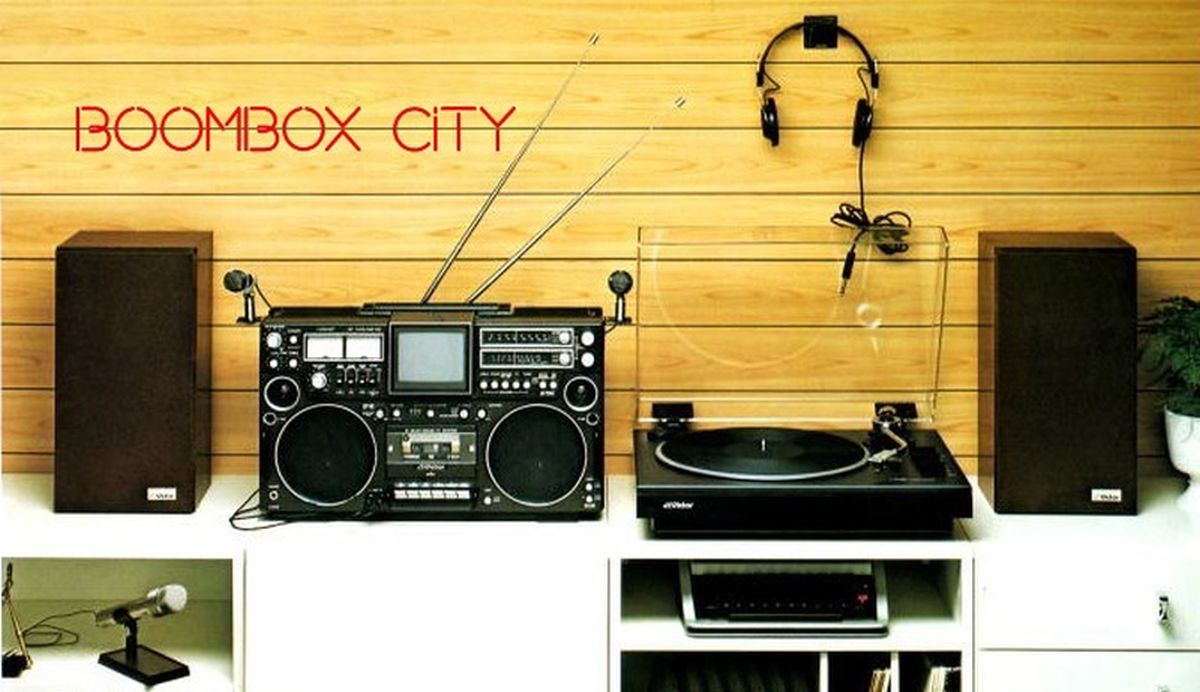